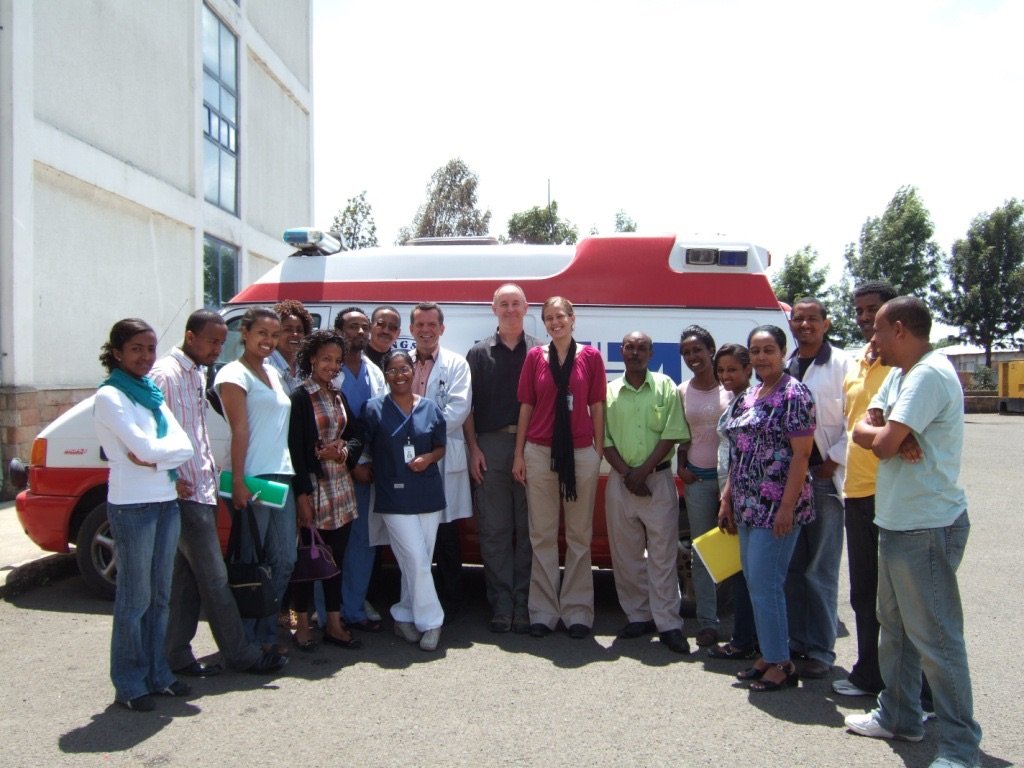 The First Team To Be Trained in Emergency First ResponseEvery medic hopes that their skills will be useful in the future and that they will be able to help people when they really need it. While working at the British Embassy in Addis Ababa, I had plenty of opportunities to put my skills into practice.

The medical facilities in Ethiopia are extremely poor and we were one of the few embassies to continue to run our own clinic, staffed by a doctor and a nurse. I am a pretty well qualified and experienced medic and in times of crisis, I assisted the doctor and attended the scene of incidents when she was on leave. During my time in Addis, I dealt with car accident victims, sports and work related injuries and even a haemorrhaging pregnant lady, though I must confess to not really knowing quite how to deal with that one! In most cases, I stabilised the casualty at the scene, and then transported them to the MCM hospital trauma unit, staffed by Dr Kjell Magne Kipplesund, a Norwegian Trauma Surgeon and his team who work for Trauma Care Ethiopia, a Norwegian charity.

After the first casualty, Kjell commented that the many victims of accidents and attacks in Ethiopia were not usually treated at the scene. More often than not, they were simply bundled into any passing vehicle and driven to the hospital. The result of which is that injuries are made much worse and those who had a good chance of survival or recovery often died or suffered long term disability or illness.Some weeks after I had taken the first casualty to the hospital, Kjell and I had the chance to discuss the lack of paramedics in Ethiopia, and how ambulance drivers and staff had no idea about crisis response and initial trauma care at the scene of an incident. He asked if I would be willing to run a course for his hospital staff and after discussing it with The Ambassador I was given the go ahead to write the course and run it at the hospital. 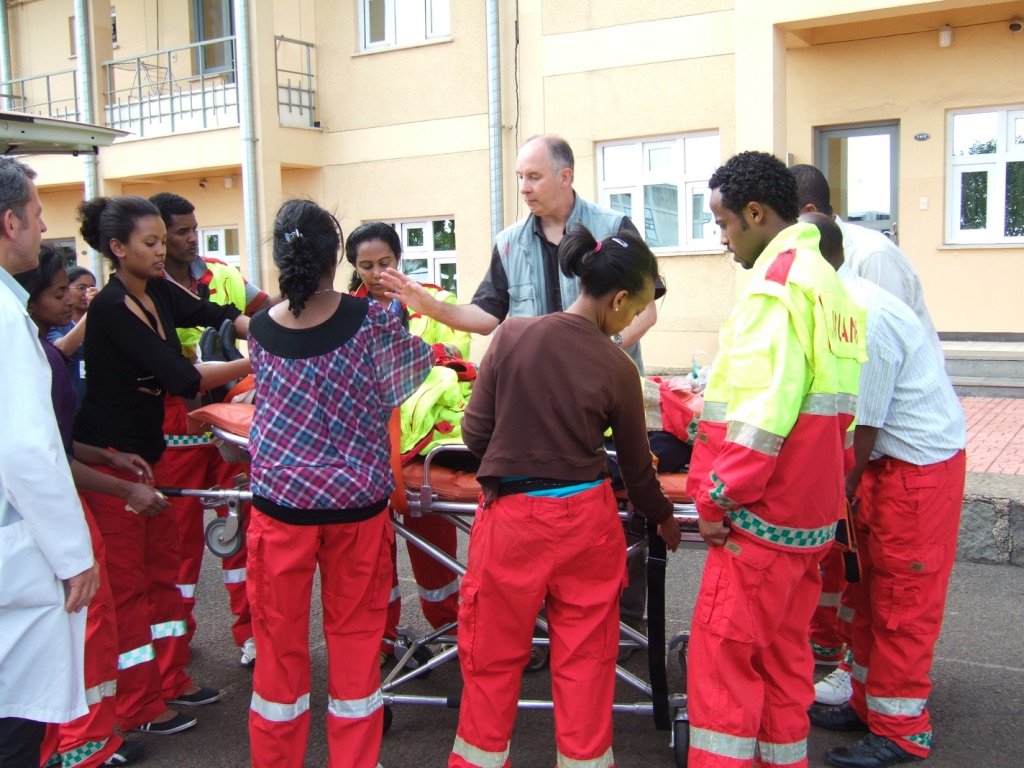 Ambulance Equipment TrainingAs staff, I had Dr Kjell and Nurses’ Sandi from the US and Noo from India. The course lasted around five weeks, with set teaching days, exercises and placements, where our 20 students, including five first aiders from the embassy, would practice what they had learned. The course covered all aspects of immediate emergency response and medical care at the scene of an accident, focusing on vehicle accidents, building site injuries, burns and stab wounds, the four main causes of injury or death in Ethiopia.

Many of the students had never used stethoscopes, spine boards, administered fluids, or even worn gloves, so for some it was a steep learning curve. All of the lessons were backed up by realistic exercises; I had previously convinced the embassy to purchase casualty makeup, fake blood and wounds, dummies and a smoke generator to add realism to the exercises I ran at the embassy. Post very kindly allowed me to use the equipment for the training at the hospital and it really did work well.

In addition to working with medical staff, drivers were taught how to check and prepare their vehicles before use, then taken on driving assessments to gauge their level of skill. They had to learn to assist medics at the scene and drive and listen to what the nurse or doctor was telling them, so that they did not further injure the casualties by driving quickly over the uneven roads in Addis. 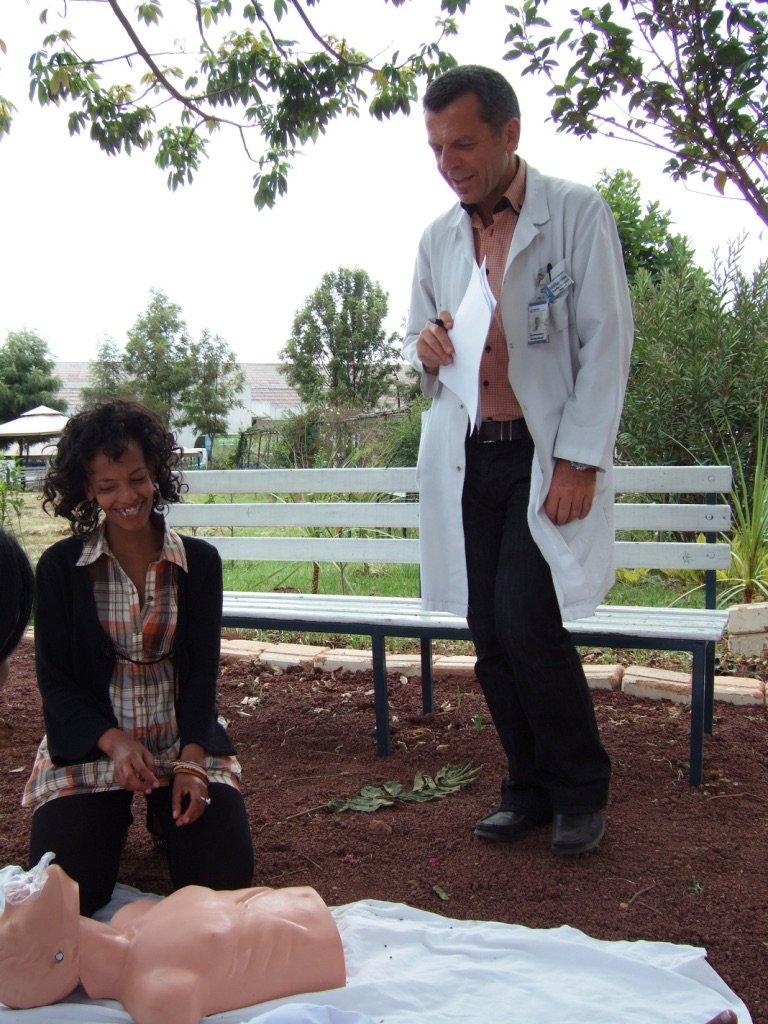 Dr Kjell Testing CPR SkillsRunning the course improved the skill of nurses, drivers and doctors and helped to forge a lasting link with the main hospital in Addis Ababa. It also helped build confidence in the medical system and what it could offer in the event of an emergency. Five of our own first aid trained staff were included on the course and in addition to learning more advanced skills they learned how to link with the hospital and work as medical support for the embassy doctor.

Our chances of having to deal with situations of the kind I encountered in Ethiopia are small in the UK, but that doesn’t mean it cannot happen. Learning the basics can mean the difference between life and death in some situations. If someone stops breathing, or suffers a catastrophic bleed, they may die a long time before an ambulance arrives. Learning the skills of CPR (cardio pulmonary resuscitation) and haemorrhage control will give you the opportunity to save a life and who would not want to do that.

The link with the hospital and the training was put to the test two days before I left Addis. I was actually unpacking my medical trauma bag, when someone said there had been an accident on the embassy compound. A tree surgeon had managed to cut through his safety rope and fallen eight meters from a tree onto hard ground. When I arrived at the scene the casualty was in considerable pain and it took a little while to calm him. Without needing to ask, our first aid trained guards helped at the scene, called the ambulance from the MCM hospital and assisted in preparing the casualty for transport to the trauma unit. The diagnosis at the hospital was that he had fractured four cervical vertebrae. I have been advised since that the injured man is now back at work and able to continue to earn money and put food on the table for his family. The diagnosis, had he been bundled into a taxi, is now unthinkable.